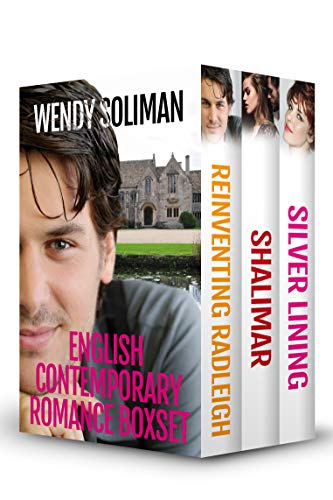 Reinventing Radleigh
When Lady Octavia Radleigh realises that her ancestral home is in danger of being repossessed by the bank, she comes up with a plan to turn it into an upmarket hotel aimed at the American market, with herself and her grandfather, the Marquess of Frampton, as aristocratic hosts. Now all she has to do is persuade Jake Bentley, a self-made man who wants to purchase the house for himself, to finance her scheme.
Jake dislikes everything that Octavia stands for but boxes himself into a corner and is compelled to go along with her plans. Problems arise at every turn, threatening the future of the estate. Jake and Octavia are forced to put aside their differences and work together to save the house they both love from unscrupulous individuals. Will the future of Radleigh ever be secure? And what of Octavia and Jake’s own futures? Can opposites really attract…

Shalimar
When Suzie Alexander catches her high-flying lawyer husband in a compromising position with her best friend, she leaves the marital home and runs off to Shalimar, the country house owned by her late grandparents where Suzie spent an idyllic childhood. But all is not as it seems in the quiet countryside, and Suzie’s peace is threatened by a man determined to oust Suzie and her neighbours from their properties.
Mark Alexander is torn between a career that consumes him and the desire to win his wife back. Jealous of the attention she receives from the local vet, he involves himself in the problems that Suzie has landed herself with, unwittingly uncovering a secret that leaves Suzie wrestling with her conscience.
Mark vows to save his wife from danger, continue with his career and win back her affections? Realising that something has to give, his heart tells him to fight for what really matters…

Silver Lining
Lauren Miller survives a three-year prison sentence by plotting her revenge against the man who put her behind bars. Released and living the life of a near recluse in a cottage in the New Forest, her life becomes complicated when attractive American journalist, Nate Black, tracks her down, determined to uncover the true reasons for her incarceration.
Lauren doesn’t trust Nate but is forced to lean on him when a man is murdered and she becomes the main suspect. Together they lay plans to uncover the involvement of her former boss in the embezzlement of millions of pounds. The money was never found and everyone seems to think that Lauren knows where it is.
Nate’s sting operation to get to the truth throws up unexpected complications that put Lauren’s life at risk. Will he find a way to protect the woman who now owns his heart… 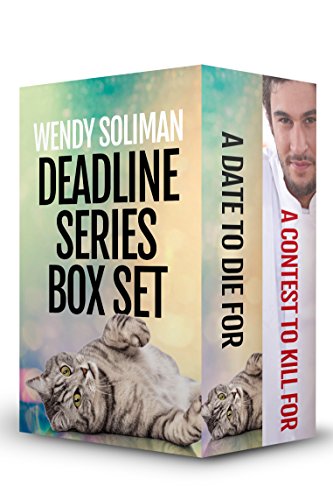 The Deadline Series Boxset: A Date to Die For / A Contest to Kill For

A Date to Die ForWhen investigative journalist, Alexi Ellis, falls victim to the Sunday Sentinel’s cutbacks, she and Cosmo, her anti-social feral cat, head for Lambourn. But this idyllic country paradise harbours secrets. A woman has gone missing under mysterious circumstances and Alexi still has a nose for a story. So too does ex-Metropolitan Police detective turned private eye, Tyler Maddox. Driven out of the police by a vicious press campaign that accused him of racism, Ty hates all journalists on principle. But Natalie Parker had been using his sister’s online dating agency and Tyler needs to find her before his sister’s business gets dragged through the mire. Reluctantly, Alexi, Tyler and Cosmo join forces. As they delve deeper into Natalie’s past, they are left with more questions than answers. Is Natalie still alive and, if so, what can have made her turn her back on her comfortable life and thriving business?Someone doesn’t want Alexi and Tyler to find out and will do whatever it takes to ensure they remain in the dark…A Contest to Kill ForHow far would you go to win a reality TV show?Investigative journalist, Alexi Ellis, moves from her high-powered job on a London Sunday paper to live in Lambourn—a sleepy village in the heart of British horseracing country. As an investor in her friends’ ailing boutique hotel she seizes on the chance to have a fly-on-the-wall televised cookery contest filmed there.Disaster strikes when the sexy, provocative contestant, guaranteed to keep viewers’ temperatures at boiling point, is murdered on set; stabbed through a silicone implant with a chef’s knife. Everyone involved with the contest is suspect but the police home in on the hotel’s glamorous chef, Marcel Gasquet.Tyler Maddox, ex-Metropolitan Police Detective turned private eye, is working on another case in the area. When he finds ties between his investigation and Alexi’s, he teams up for the second time with the attractive reporter, looking for answers. Delving deeper into the contestants’ backgrounds, they all have compelling reasons to want Juliette dead, but the police seem convinced Marcel is their man. Can Alexi and Ty clear his name, save the show and secure the future of the hotel…

Name of the Game

Ashley believes her boss when he says his marriage if over. They enter into a steamy affair and Ashley works her butt off, preparing the company for amalgamation with a rival, so that she and Matt can go public with their relationship. Her world falls apart when Matt’s ‘estranged’ wife appears at the office, clearly pregnant.
Ashley breaks off the affair but Matt won’t let up on her. He convinces her that he isn’t the father of the baby but must stand by Eve until the amalgamation goes through because she owns a vital five per cent of the company’s shares.
Someone is trying to sabotage the amalgamation. Ashley delves deep, trying to find out who, and to rescue the man she loves from the brink of ruin, only to find that she’s placed her own life on the line…

Downsizing
Maxine Small, invisible in a crowded room because no one can see through the extraneous layers of fat to the intelligent and sensitive girl lurking beneath them. No one, that is, except local heartthrob Noah Fenwick. But he too lets her down when he ups and marries Maxine’s best friend—her pretty, skinny best friend whom he always pretended to hate.

Maxine runs away to university and buries herself in her studies. She doesn't see Noah again for twelve years but never stops thinking about his betrayal. Slimmer now, she returns to her home town as a successful lawyer, hoping to lay the ghost that’s Noah to rest so she can get on with the rest of her life.

With three children, Noah is trapped in a loveless marriage with no escape clause. Drawn towards him as strongly as ever, Maxine learns the true reasons behind his marriage to Cassie, which places her in an impossible position. With the children being used as human bargaining tools, there’s nothing Noah and Maxine can do about their feelings for one another. Or is there…
Topspin

Enforcer, Jack Regent, known and feared throughout the East End of London. In Jack’s line of work, life expectancy is short, retirement benefits zilch, and there’s always someone new coming along who thinks he’s harder.
Tired of constantly watching his own back, Jack retires to the south coast where no one knows who he is. Content to spend his days honing his tennis game and drinking too much, Jack’s past catches up with him when thugs with a grudge track him down, bursting for revenge. Jack’s violent proclivities refuse to stay dormant when the people he cares about most are placed in danger and his peaceful life starts to crumble around him.
How many laws will he break to protect the wife who betrayed him…

Unimpressed by the direction the police force was moving in, recently divorced and in his early forties, Charlie Hunter takes early retirement and sets out to live a quiet life restoring his trawler yacht. But his past won’t let him go and when Kara Webb, an attractive woman who was still a child when he last saw her, asks him to help locate her long lost sister, Charlie reluctantly agrees. Perhaps if he’d know it would pull him into the murky world of the Russian Mafia, sophisticated cyber crime, oh and world terrorism, putting his life in severe danger, he might have thought twice about it…

Charlie always doubted that Mike Kendall killed bookie Jeff Spelling. Persuaded by Mike’s daughter to reinvestigate, Charlie is drawn into the murky world of race fixing. When the solicitor acting for powerful gaming club magnet, Peter Garnet, is also murdered, Charlie is forced to confront dormant family issues when his estranged step-brother appeals to him for help.

His old nemesis, Inspector Gillian Slater, is out for Charlie’s blood. Charlie was one of the last people to see the solicitor alive so she’s convinced he knows more about the his death than he’s prepared to admit and is determined to pin the crime on him.

Charlie and Kara, suspecting a drug connection, are caught in a life and death situation, fighting against the odds to uncover the truth.

Why kill the survivors of a sinking ship?

A speeding boat rams a life raft, leaving no survivors. A man embroiled in an investigation of potential suicide bombers disappears…

Retired inspector Charlie Hunter's belief that the two events are related leads him to accept a job working a charter between England and France. The only way to find out the truth is to be the man on the inside.

But Charlie's life is at risk on the rough Channel. All is not as it seems on the shifting seas, and some players are holding secrets that will change the game…and the sunken life raft is the key.

Go back to the beginning with Unfinished Business, available now!